Bringing greater automation and control to the handling of service requests and alerts at Calastone, the largest global funds network.

Calastone is a highly successful technology company. Its solution is middleware for the global funds industry, translating messages between different counterparties, such as order instructions, into formats which each can easily understand and act on. Calastone’s value grows with every institution that uses its platform and, thanks to these network effects, it has seen exponential growth, evidenced by the fact that today it is working with over 3,500 clients in 53 countries and territories, processing £250 billion of investment value each month.

In 2019, in large part owing to the growth it had seen in message volume and related service requests, Calastone decided to seek an external software solution to improve the efficiency and effectiveness of its operational service desk.

The challenges they faced, which they sought to address to improve scalability, were as follows:

Calastone evaluated several solutions to address its needs. For instance, it assessed Einstein from Salesforce, since Salesforce is its CRM system used for recording all of its customer interactions.

Calastone ultimately selected Jaid because of the flexibility the solution offered. Jaid is a system of intelligence that sits between multiple systems of record, such as CRM or fund administration platforms, and multiple client interaction channels, such as email clients or team collaboration tools like Slack. As such, it is able to query and draw insight from multiple data sources and use this intelligence to automate, and present information, into multiple workflows and communication channels.

As Calastone has found, the architecture of the Jaid platform gives it several advantages over other solutions in the market, such as:

The Jaid solution went live four months after the system had been selected. System set-up, integration and testing were all achieved within two months. The timeline was made longer by two factors; Calastone desired several weeks of parallel testing, and some query types took time to build enough data to train Jaid effectively.

Now that the system has been live and learning for 18 months, it has over 93% accuracy in first-time classification of queries.

The accurate handling of customer enquiries has greatly automated workflows and addressed the challenges described above. Now, all communications are logged. The system prompts advisors to respond if they have not answered the query within the time frame required, obviating the need for manual checks. Further, there is minimal time or productivity lost during shift changeovers since everything is recorded and categorized correctly in the CRM system. As predicted at the outset of the project, the number of enquiries recorded in the CRM increased by over 30% once the Jaid system was live, without any commensurate increase in emails or calls, indicating that there was significant underreporting in the status quo.

The automation has saved time, but the solution’s benefits have gone far beyond this.

It is estimated that each operational analyst saves around 4 hours a week, not having to do manual work or checks that are now automated by the system. Individually, this time saving is impressive, but in aggregate across a team, it really starts to add up. Moreover, in having to do less manual work, focusing on what matters, the role becomes more enjoyable, helping Calastone to recruit and retain high-calibre people in the team.

But, it is the management insights where Calastone believes that most value has been delivered by the system. As Mike Davies, Head of Global Operations at Calastone, says:

“The Jaid system helps give me dramatically better insights into the workings of our operational service desk. I get a full picture of what kinds of queries we are receiving and how long they are taking to resolve. This helps me to understand the changing nature of our business, to plan capacity correctly, to identify areas for product optimization, and to ensure we are meeting client SLAs.”

Given the success of the current use case in bringing more automation and control to the Calastone operational service desk, as well as extensibility of the Jaid platform, Calastone is now working together with Jaid on a new use case. The two companies are looking at how the platform can be used to automate salespeople’s updates to the CRM, integrating initially with email but ultimately to be extended to include Teams chat, to save salespeople the effort of manually updating the system for changes in deal status. This new use case is expected to be live in 2022.

Ready to implement Jaid as your shared mailbox solution?

Let's show you how we can help 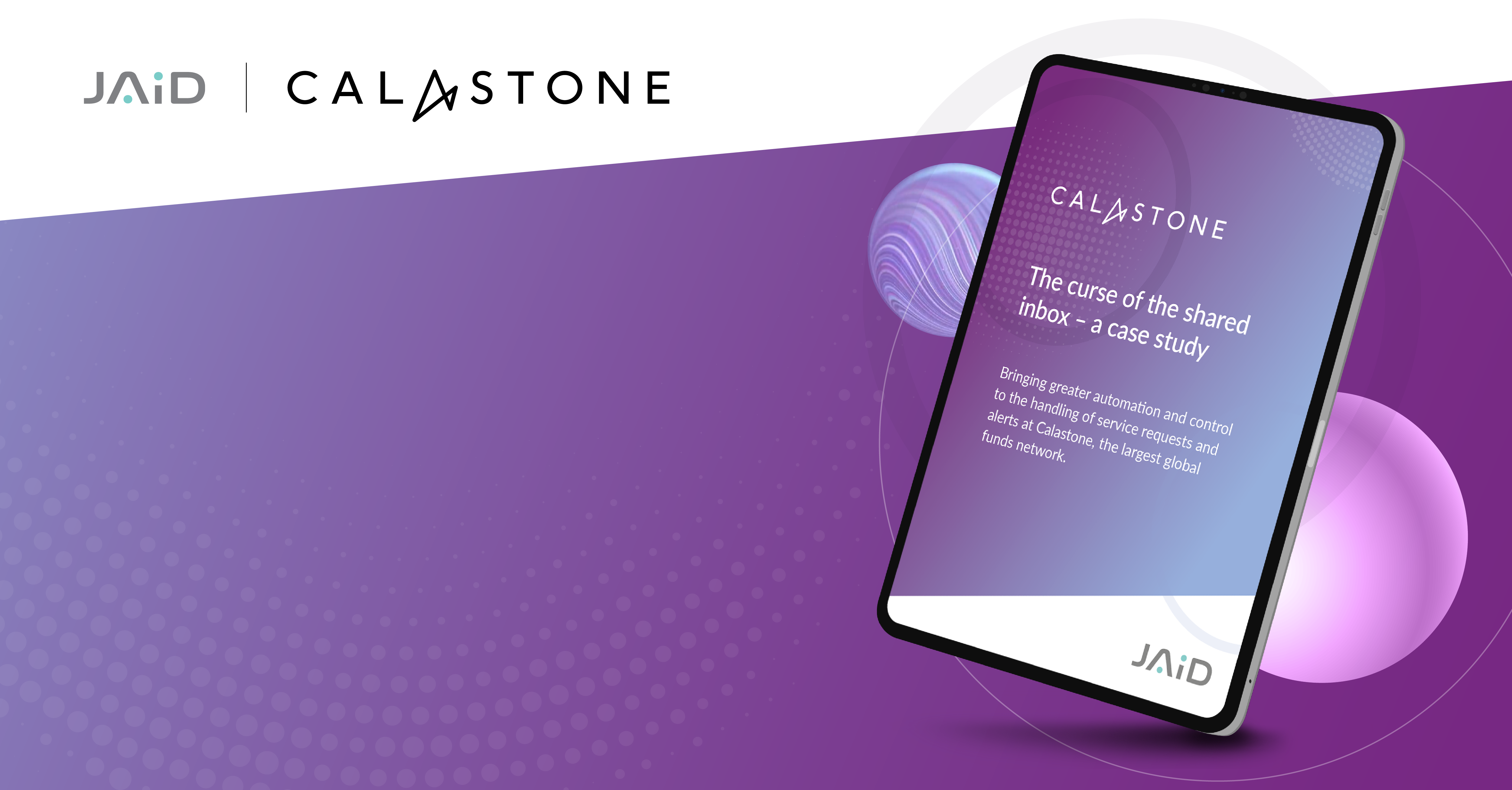 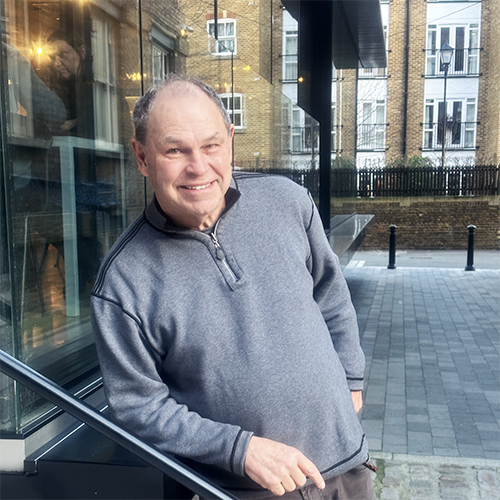 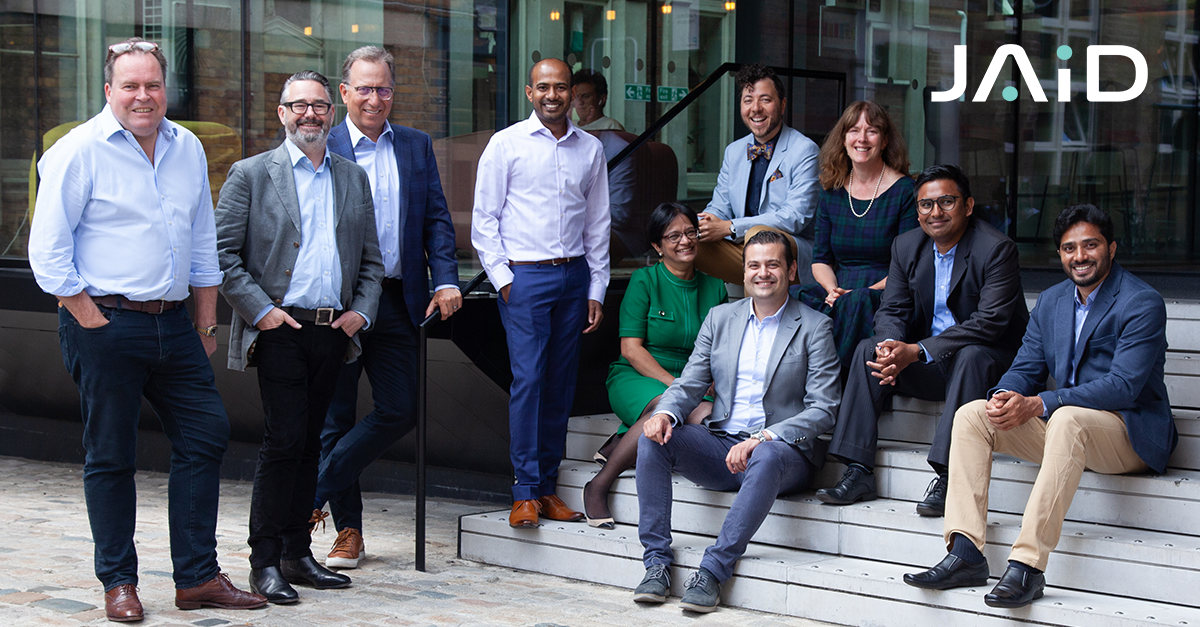 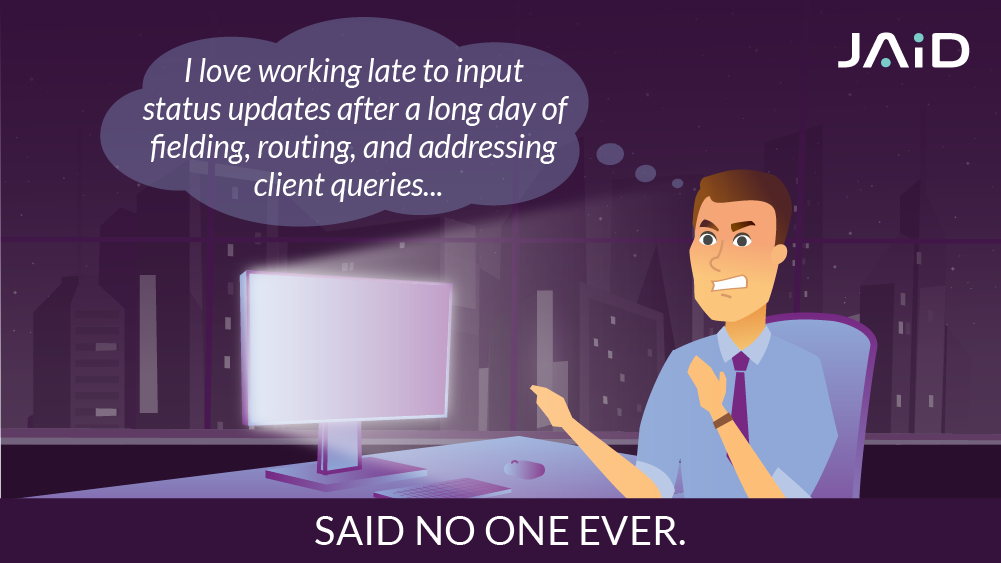 Read more
We use cookies on our website to give you the most relevant experience by remembering your preferences and repeat visits. By clicking “Accept All”, you consent to the use of ALL the cookies. However, you may visit "Cookie Settings" to provide a controlled consent.
Cookie SettingsAccept All
Manage consent

This website uses cookies to improve your experience while you navigate through the website. Out of these, the cookies that are categorized as necessary are stored on your browser as they are essential for the working of basic functionalities of the website. We also use third-party cookies that help us analyze and understand how you use this website. These cookies will be stored in your browser only with your consent. You also have the option to opt-out of these cookies. But opting out of some of these cookies may affect your browsing experience.
Necessary Always Enabled
Necessary cookies are absolutely essential for the website to function properly. These cookies ensure basic functionalities and security features of the website, anonymously.
Functional
Functional cookies help to perform certain functionalities like sharing the content of the website on social media platforms, collect feedbacks, and other third-party features.
Performance
Performance cookies are used to understand and analyze the key performance indexes of the website which helps in delivering a better user experience for the visitors.
Analytics
Analytical cookies are used to understand how visitors interact with the website. These cookies help provide information on metrics the number of visitors, bounce rate, traffic source, etc.
Advertisement
Advertisement cookies are used to provide visitors with relevant ads and marketing campaigns. These cookies track visitors across websites and collect information to provide customized ads.
Others
Other uncategorized cookies are those that are being analyzed and have not been classified into a category as yet.
SAVE & ACCEPT